Spenser Confidential is streaming on Netflix. 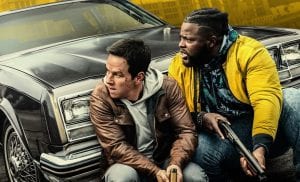 Gather round, children, and let Graybeard Tim regale you with tales of the Long Ago Times! Back in the day, there were three tiers of screened entertainment. The first was theatrical films. This was where the Scorseses, Spielbergs, and Coppolas of the world lived, and actors like Harrison Ford and Tom Cruise strode the world like a colossus. In short, it was the big time.

The second tier was television, and at the time it was looked at as a decidedly lesser art form.* You had formulaic cop shows with lawmen (and they were almost always men) who would gleefully perform police brutality at a moment’s notice. You had legal dramas where everyone in the cast slept with each other, and HR seemed to be totally cool with it. You had unfunny sitcoms featuring canned laughter.

The third tier was the made for TV movie. See, before we had zillions of hours of content to draw upon, networks had to do something to fill programming time slots. They decided, in their infinite wisdom, that the networks would make their own movies. Could they afford giant stars like the aforementioned Harrison Ford? They could not. Would they make hard-hitting dramas about socially relevant issues? They would not.

Like any other form of media, a few made for TV movies were damn good.** A few, but most of them were designed to be as inoffensive as possible to the widest group of viewers. When streaming services came along, some people thought that they would act as a delivery mechanism for challenging and interesting independent films. Netflix never got that memo, as they demonstrated with the fitfully entertaining and consistently dumb Spenser Confidential.

We’re introduced to Spenser (Mark Wahlberg), a uniformed Boston cop. He arrives at the home of Captain John Boylan (Michael Gaston), barges into the good Captain’s home, and proceeds to kick the stuffing out of him. Why? It’s because a) he catches Boylan beating his wife and b) there are whispers of Boylan being a dirty cop who’s Up To No Good. Unfortunately, Spenser has no proof Boylan is dirty, and you can’t just walk into somebody’s home and kick their ass, not even in Boston. As a result, Spenser is quickly thrown in prison. 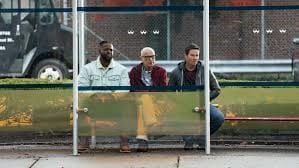 Five years later, he’s released. Though just before that happens, a group of Neo-Nazis led by Squeeb (Post Malone) tells him to get the hell out of the Commonwealth of Massachusetts. Fine by Spenser, as his post-prison goal is to become a truck driver and move to Arizona. His mentor Henry (Alan Arkin), a boxing trainer, puts him up at his home in Southie. It’s far from idyllic, as Spenser is forced to share a room with Hawk (Winston Duke), an upcoming mixed-martial artist. In time, Spenser will start a new life and bid adieu to Beantown.

Only he won’t, as Captain Boylan is violently and inconveniently murdered. Soon after, straight-arrow cop Terrance Graham (Brandon Scales) dies by suicide. Spenser becomes suspicious and takes it upon himself to investigate. In the grand tradition of TV detectives, he proves to be simultaneously great (makes wild deductions based on very little hard evidence) and terrible (walks into situations where he’s guaranteed an ass-kicking).

Who could be the mastermind behind these slayings? Could it be Driscoll (Bokeem Woodbine), Spenser’s ex-partner? Perhaps “Tracksuit” Charlie Bentwood (James DuMont) is the culprit, despite being the most obviously dressed criminal in the history of crime? Will he get back together with his hilariously foulmouthed ex Cissy (Iliza Shlesinger)? Will Spenser and Hawk, despite their initial hostility, become super best friends forever?

This is the fifth collaboration between Wahlberg and director Peter Berg. For a while there, Berg made some fun and interesting movies, including the buddy comedy The Rundown and the drunken superhero adventure Hancock. Then he made Lone Survivor with Wahlberg, and he’s been focusing on a kind of hyperpatriotic meathead cinema. That frustrates me since I find Berg to frequently be a stylish and intelligent director specializing in fast and intense action. Where is that guy now?

Spenser Confidential feels pedestrian from start to finish. It’s got too many clichés to feel lively, and too many poorly shot and edited action scenes to be exciting. The film genuinely feels like one of those old TV movies, the ones where there’s very little sparks of energy or imagination, just a dogged determination to drag the movie across the finish line. A few scenes ensure it’s not straight-up unwatchable, including a hilarious sequence where Wahlberg is attacked by a dog. The film is advertised as an action-comedy, yet it never features enough action or comedy for it to be satisfying.

You might be aware of the character of Spenser from the 1980’s TV series Spenser: For Hire. You also might know him from Robert B. Parker’s series of detective novels. In either iteration, Spenser is a Boston private detective with a habit of quoting poetry and a taste for fine cooking. You should also be aware that the character in Spenser Confidential is nothing like that, except the fact that he’s from Boston. 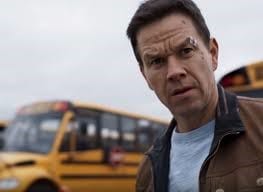 Screenwriters Sean O’Keefe and Brian Helgeland based their script on Wonderland, a Spenser novel written by Ace Atkins, after the 2010 death of Parker. I have a feeling their screenplay was heavily interfered with since there are a number of problems. The Spenser from the novels and TV series had interesting layers not usually seen in Boston-based crime fiction. The Spenser here? He’s basically just a dude interested in solving a mystery because the movie tells him to. There’s no complexity, and his character is at the mercy of the plot. Speaking of which, the plotting is simultaneously clear as mud and feels like a copy of a more interesting and better movie. If your story deals with hoary old tropes such as corrupt cops and tracksuit wearing wiseguys, you damn sure better put a fresh spin on them. The tough guy dialogue that made me want to watch Gone Baby Gone instead didn’t help, either. But there was one aspect that worked well—which we’ll get to in a bit.

With two exceptions, the cast feels like they’re there to support what looks like a star vehicle for Wahlberg. In most of his later roles, he plays variations on the same theme: the generic blue-collar hero. It’s a shame, because Wahlberg is a genuinely skilled performer when playing a character who’s kind of dim or way outside his comfort zone. Instead, his Spencer is a standard-issue Boston bro with a macho streak a mile wide. As Henry, Alan Arkin has a single amusing scene where he’s kidnapped and complains about having to pee. Also wasted is the highly talented Bokeem Woodbine, and he’s at least allowed to put some needed sparkle on dreary lines.

The first bright spot of the film is Iliza Shlesinger as Cissy, Spenser’s ex. Her role in the plot is mostly inconsequential as the pain-in-the-ass sorta girlfriend, and I wonder if she knew that and took matters into her own hands. She storms into the film as a force of nature, armed with a chowdah-thick accent and an arsenal of profanity. As a result, her scenes feel fresh and her character feels singular. 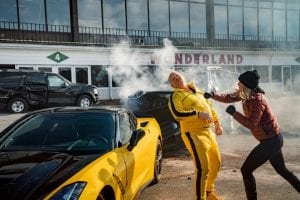 Then there’s the mighty Winston Duke. As Hawk, he’s supposed to be Spenser’s sidekick. It should have been the other way around, since his MMA fighter/investigator is far more compelling than the title character. Duke can handle the action scenes well, and I’d love to see him work with a cutting-edge action filmmaker like Chad Stahelski or the Wachowskis. He’s just as skilled with drama, and during a small scene where a young boy asks him if he’s a good or bad giant, Duke plays the moment with tenderness.

I suppose it fits to call Spenser Confidential a TV movie. It’s streaming on Netflix, as one of the more than three billion options found on the streaming giant’s platform. If you’re in the market for some fisticuffs, some wisecracks, and a little light mystery, could you do worse? Absolutely, but you could do a hell of a lot better.

*Ironic, considering the smartest and most compelling storytelling is happening on TV these days.

**Spielberg’s first film Duel was a made for TV movie, and for a long while there, HBO was killing it with their own films.

Tim Brennan
Tim has been alarmingly enthusiastic about movies ever since childhood. He grew up in Boulder and, foolishly, left Colorado to study Communications in Washington State. Making matters worse, he moved to Connecticut after meeting his too-good-for-him wife. Drawn by the Rockies and a mild climate, he triumphantly returned and settled down back in Boulder County. He's written numerous screenplays, loves hiking, and embarrassed himself in front of Samuel L. Jackson. True story.
Tagged: Movie ReviewTim Brennan
OnCheyenne.com is a directory and information guide for Cheyenne, Wyoming.
Discover the best of Cheyenne shopping, restaurants, night life, breweries, events, business, outdoors, fun, local life, real estate, transportation, jobs, and schools.
Looking for what to do in Cheyenne? OnCheyenne.com has columnists, and bloggers to keep you up to date on the best of Cheyenne, Wyoming.